Over 200,000 individuals in Arizona are Blind or Visually Impaired. Make a donation today to support the mission of ACBVI in changing lives!

Learn to use software and equipment that will help you gain access to computers, smart phones, and other devices.

Get the emotional, legal and community support you need to thrive with vision loss or Combined Vision and Hearing Loss.

Get an expert assessment of your low vision needs and learn to use devices that will help you achieve your goals.

Have fun and make new friends as you explore social activities like woodturning, ceramics, trivia, fitness and music.

Learn to travel on your own more safely with the help of assistive devices and techniques.

To refer one of your clients or for additional information, please contact: 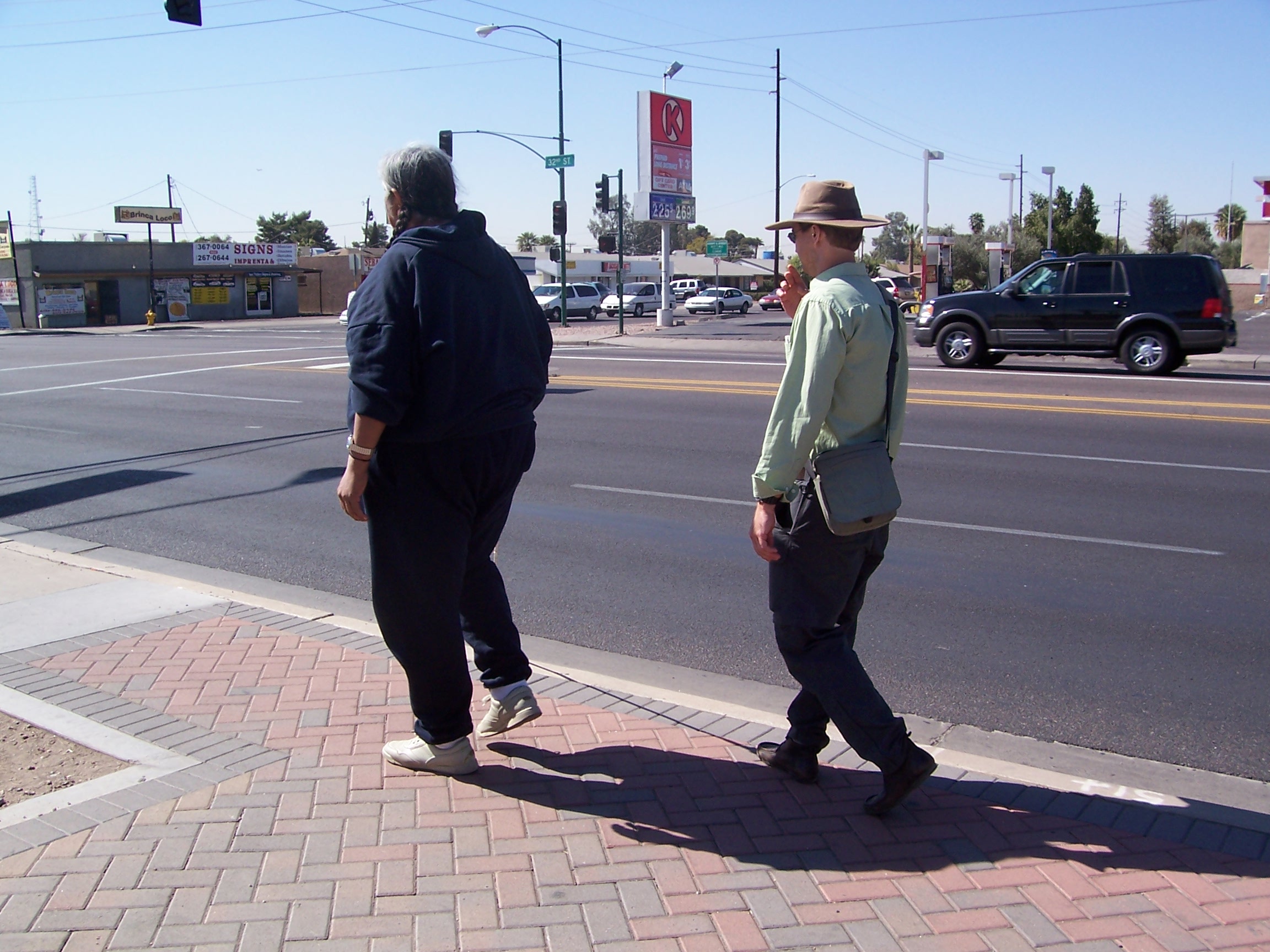 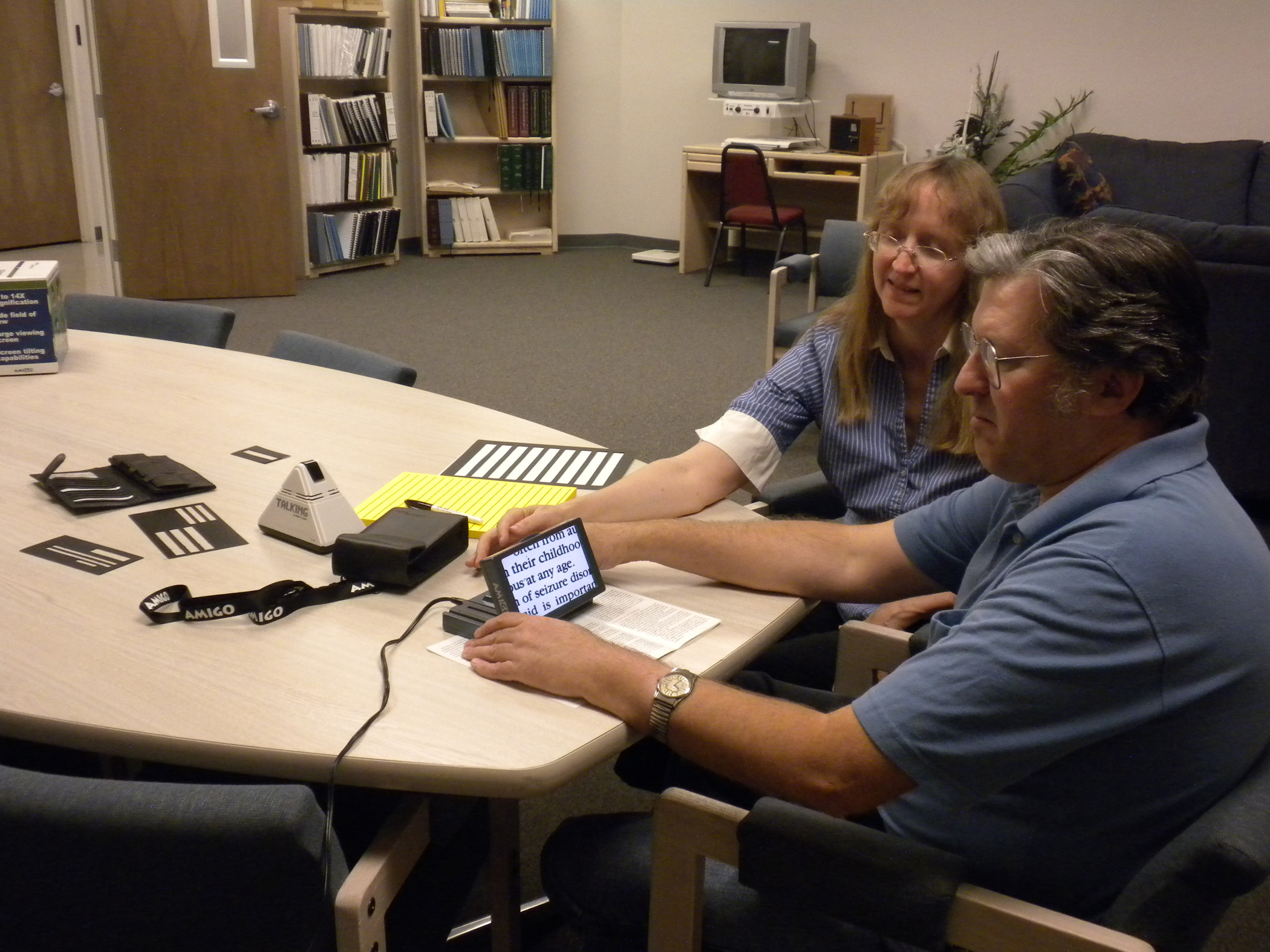 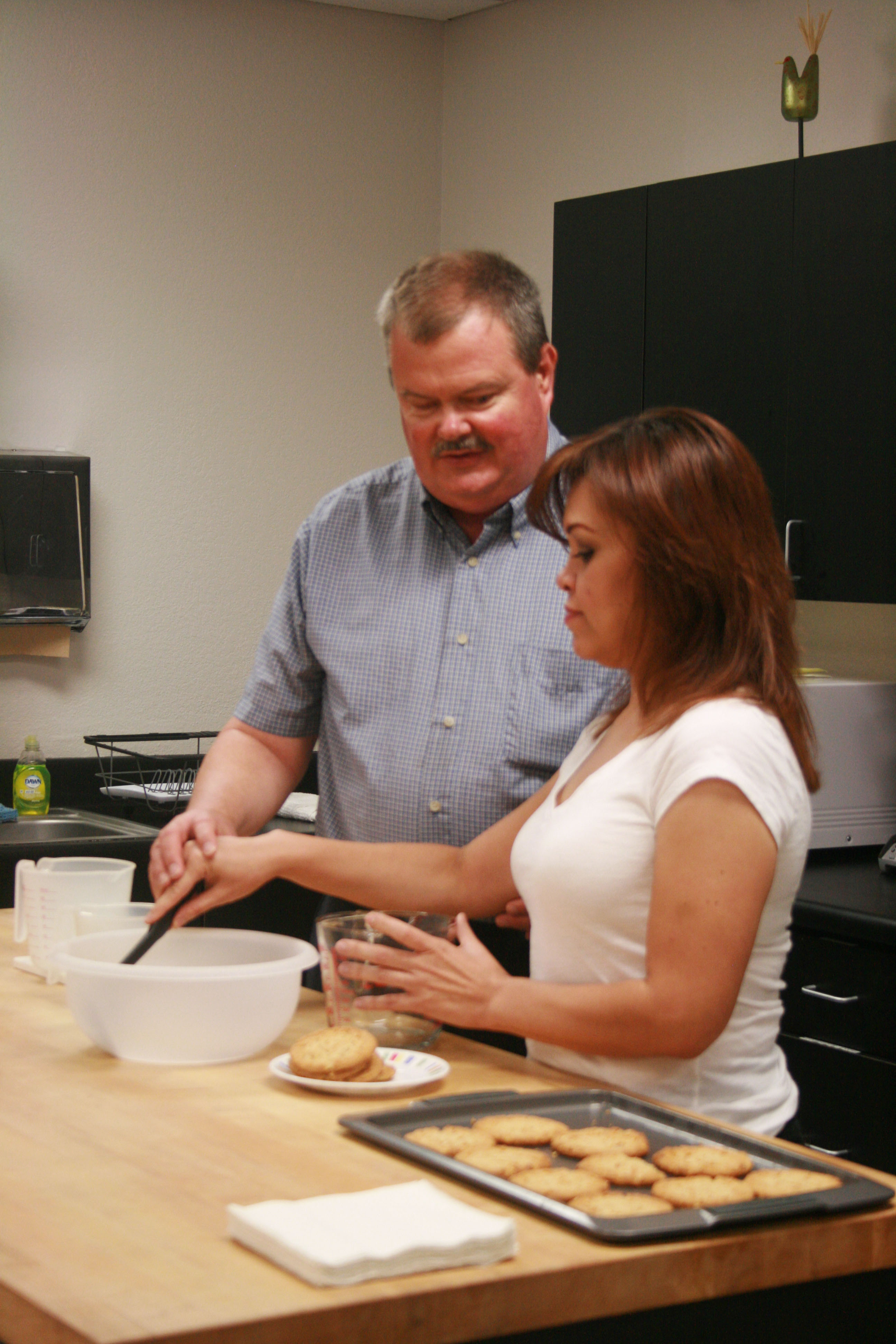 An agency providing services so that individuals with vision loss can achieve their full potential.

Arizona Center for the Blind and Visually Impaired has been empowering people with vision loss since 1947. Our highly skilled and experienced multi-disciplinary team of professionals offers individualized training utilizing state of the art technologies and proven rehabilitation practices. ACBVI assists clients in coping with vision loss - with courage and dignity and a "Can Do" attitude. We are proud to provide the resources our clients need to achieve independence and a full participation in the spheres of life they choose. We celebrate each and every blind and visually impaired person who develops the skills and a tenacity to go to work, go to school, and actively participate in society.

To facilitate independence and promote full participation in all spheres of life for those who experience vision loss. Primary Agency Belief: That the provision of specialized services for individuals with vision loss is necessary in order to achieve their goals, aspirations in the regaining of personal independence. Individuals with visual impairments have unique needs which are most effectively addressed utilizing a multi-disciplinary team approach. In order to meet these unique needs, individuals must have specialized services, books and material and appropriate media (including Braille) as well as specialized equipment and technology to assure equal access to education, employment and personal independence. There must be adequate profession preparation programs to train staff in providing these specialized services and there must be ongoing personnel development opportunities for staff to continue the updating and introduction of new skills.

In 1947, a small group of individuals who were blind and visually impaired began meeting in each other's homes to learn ways to help each other achieve economic independence. Training sessions were conducted in piano tuning, and mop and broom making. These were some of the few "job trades" available to individuals who were blind during that era. Often over coffee and dessert, individuals would discuss how they accomplished everyday tasks and would share techniques that had worked for them. These gatherings became the prototype of today's support groups.

Over time, the number of groups and meeting locations grew. Socialization and support groups became the focus of activity, while skills training was provided to individuals, at their request, by a State rehabilitation or "home" teacher. In 1952, the Coordinating Council of the Blind and the local Maricopa Club established a central meeting place for all the groups at 232 S. Central Avenue in Phoenix. In 1953, the organization incorporated and hired its first executive director.

In the early 1960s, when the Phoenix Blind Center building was to be demolished, local Lions clubs began planning for a permanent facility. By 1961, twenty-eight Lions clubs had formed a voluntary affiliation, named in honor of Melvin Jones (founder of Lions International and an Arizona native) to raise funds and identify a site for a permanent facility for the Phoenix Blind Center. Lion Keith Taylor and his wife Gladys donated 2.5 acres of land on the northwest corner of 32nd Street and Roosevelt in Phoenix, the current site of today's Arizona Center for the Blind and Visually Impaired.

Under the dynamic leadership of Lions Wally Pensinger, Ames Thompson, Bill Lockhart and Mark Wilson, a growing building fund was generated and voluntary labor recruited from Lions clubs and labor unions. The original 9,100 square foot building at 3100 E. Roosevelt Street was dedicated by Lions International President, Aubrey Green and Secretary of the State of Arizona, Wesley Bolen on February 26, 1964.

Recognizing the importance of rehabilitation, Executive Director Frank Kells began working with the State to provide rehabilitation instructional service (adaptive skills training for daily living) for Center participants and also hired the Center's first Orientation and Mobility instructor in 1964. Additionally, the Center started a special aids service, which provided adaptive aids and devices for individuals who were blind and visually impaired. Although social and recreational programs remained a major focus of the Center's activities, the client base doubled over the next five years with the advent of rehabilitation services.

After Frank Kells left the agency in 1969, Allen Woody, formerly a director of services for the blind in Illinois was hired as executive director in 1971.

The 1970s were a hotbed of activity, with increased funding at the state and federal levels. During the 1970s Woody obtained federal Independent Living and Older Americans Act funding, which included transportation funding, thus allowing the Center to greatly increase both its rehabilitation and social recreation services delivery.

In 1989, the much-loved Woody Allen died. Within the following year after a national search for his replacement, Jim LaMay filled his position as Executive Director. Mr. LaMay had previously worked as an Orientation & Mobility instructor in Chicago and Minneapolis. In Minnesota, he became the Manager of Community Rehabilitation Services for the Minneapolis Society for the Blind, and later Director of Low Vision Services for Vision Loss Resources. Mr. LaMay was charged by our Board of Directors to develop the Center into a state of the art rehabilitation program for adults who were blind and visually impaired.

Under LaMay’s leadership, strong and abiding relationships were established with United Way, the Arizona Rehabilitation Services Administration, and private foundations throughout the Valley. These resources resulted in providing additional staff and support for additional rehabilitation services, a Low Vision clinic, and an Assistive Technology center.

As the Center continued to increase its capacity to serve clients, it also experienced a new growth and development in its Board of Directors. One of its newest board members, Steve Welker, epitomized the involvement, leadership, and transformational changes necessary to strengthen the agency.

Mr. Welker, who had previously been involved in a car accident that resulted in his becoming totally blind, had received services through the Center which assisted him in returning to work and later becoming the President of his own insurance company. His desire to “give back to the agency” resulted in his leadership as a member of the Board of Directors, Vice-President and finally Chairman of the Board of Directors. Steve, recognizing the importance of public awareness became a tireless speaker and presenter regarding the Arizona Center for the Blind and Visually Impaired. He spearheaded a driving strategic planning process and the need for remodeling and expansion of the agency’s facilities.

In the spring of 2000, under the combined leadership of Steve Welker (Chairman of the Board of Directors), Rich Mettille (Vice Chair) and Jim LaMay (Executive Director), and with the help of many donors and friends of the Center, the Arizona Center for the Blind and Visually Impaired embarked upon a major Capital Campaign. The success of the Capital Campaign resulted in a completely redesigned, consolidated and expanded main facility. The new facility allowed the Center to bring its entire staff - previously housed in two buildings - under one roof, providing total connectivity of communications and computer functions, greater economics and efficiencies of administrative functions and facilities management.

ACBVI had long been a proponent of planning a service approach that addresses the diverse and variety of individual needs presented by vision loss. For this reason, “comprehensive rehabilitation services” was felt to be the best approach in addressing these multitudes of needs. Through a Federal and

State Establishment Grant, the agency was able to begin providing a continuum of services for vocational and educational needs of individuals who are blind and visually impaired. The success of this establishment grant led to continuing contracts with the Arizona Rehabilitation Services Administration utilizing this service delivery system model. Also recognized as a leader in the area of Assistive Technology and cross disability training, the agency was selected to provide on-site training for State Rehabilitation Counselors and One-Stop Workforce Centers, and maintain a website related to Assistive Technology for the state of Arizona. The agency has also continued national research in Assistive Technology in collaboration with The National Eye Institute.

Recently ACBVI has taken on a new challenge in developing our Comprehensive Rehabilitation Program and Vocational Rehabilitation services so that they are accessible for individuals who are Deafblind and/or possess Combined Vision and Hearing Loss. A specialized team of instructors who have the expertise and skills necessary to work with these clients is now available. Through our Strategic Planning and Long Range Agency plan (utilizing consultation from Bailey Strategic Group and Lance Strategies), our goal is to create accessibility to all agency programs and services to this underserved and in many cases unserved population. The agency also now offers an advanced training program for employment in Assistive Technology. The program - which is twelve months in duration - leads to entry-level Information Technology career paths in industry related positions. With our experience in working with various disabilities, the agency now provides Community Disability Awareness Training to educate employers, service providers, state agencies, service organizations and others who are interested in having a better understanding and awareness of members of their community with disabilities. We continue to strive to bring about changes in technology and in the community that will assist in focusing on abilities rather than disabilities.